I’m out of town this week at a conference in San Diego. I made this week’s Tuesdays with Dorie recipe, Chocolate-Chocolate Cupcakes last week. It was chosen by Clara of I Heart Food4Thought. You can find the recipe on her blog.

I decided to make mock-Hostess Cupcakes. Although I haven’t had a real one in ages, I do remember them being quite tasty. Ignorance is bliss and now that I know better, their ingredient list scares me off. There are a bunch of mock-Hostess Cupcake recipes on the internet and I probably should have read them before I made mine. It certainly would have been easier. Most of the recipes say to place the filling in a pastry bag and squirt it into the bottom of the cupcake. Instead, I used an apple-corer to take out a nub from the top of the cupcake and spooned the filling into the cupcake and then replaced the nub to seal up the hole. Not the prettiest looking thing.

These cupcakes were quite tasty, both plain and after I utterly destroyed them.

I go to the gym in the morning before work and if I am running short on time I often grab a snack bar to eat on the way to the gym. I also carry them around in my purse and at work to eat when I get hungry.

I’m picky about my snack bars and only buy and eat ones that have natural, non-chemically sounding, and short ingredient lists. I’ve been rotating between Lara Bars, Think Organic Bars, and Clif Nectar Bars. This week I found three other brands:

It’s sooo good and sooo easy. Parmesan-Roasted Butternut Squash–from the November 2008 issue of Gourmet magazine. I served it with polenta and steamed broccoli for dinner last night. Lunch can not come quick enough, b/c I’m having the leftovers for lunch today.

I’m not a pumpkin fan. I don’t crave pumpkin pie around Thanksgiving, nor do I get excited when Starbucks rolls out their pumpkin lattes every year (I wish they would bring back their maple lattes!). It’s not that I hate pumpkin, it’s just that I’m indifferent towards it.

My husband on the other hand loves pumpkin pie, but has a thing against whole pumpkins. Strange. I bought two miniature pumpkins to use in my photos and he wanted to make sure I wasn’t using them in the muffins and that he didn’t like seeing them on the counter. He never ceases to amaze me. After 14 years of knowing the man, you would think I would know all his idiosyncrasies. He certainly keeps me on my toes.

Kelly of Sounding My Barbaric Gulp chose this week’s Tuesdays with Dorie recipe, Pumpkin Muffins. You can find the recipe on her blog. So for the first time in my life I bought canned pumpkin.

The original recipe called for golden raisins and instead I used orange-flavored dried cranberries. I also used 1/2 white whole-wheat flour and 1/2 whole-wheat pastry flour, so the muffins could be 100% whole-wheat without being dense. I learned this trick from making these pancakes. 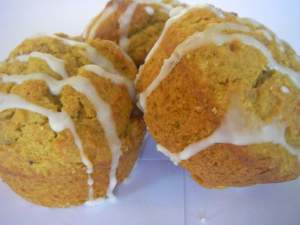 The recipe also called for using raw unsalted sunflower seeds as a garnish on top of the muffins. Because I have a no-nuts husband (shhh…I used walnuts in the batter just chopped them up super-tiny 😉 ), I decided to garnish my muffins with a buttermilk icing. The icing was super easy to make: 1 cup of powdered sugar, 1  and 1/2 tablespoons of buttermilk, and 1/2 teaspoon of apple cider vinegar. I found the orginal recipe on chow.com. I whisked the ingredients directly in a sandwich bag and snipped of a corner to pipe the icing onto the muffins. It wasn’t the neatest method, but I didn’t want to dirty another bowl. I’m lazy like that. 😛

These muffins were good, not outstanding. My husband loved these (walnuts, pumpkins, and all). I loved the icing, though. The tang of buttermilk with the apple-cider vinegar works well.