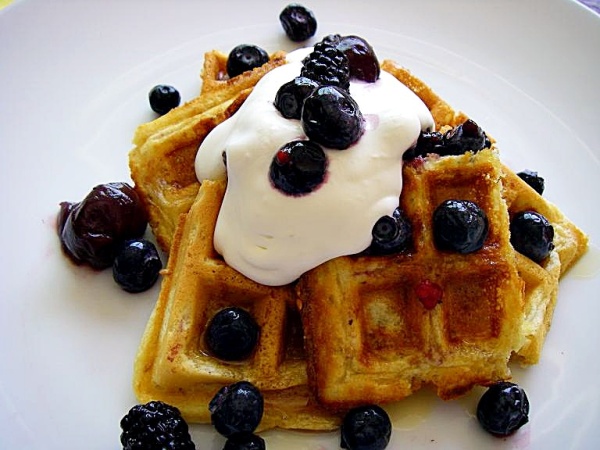 I love breakfast. It’s my favorite meal of the day. I love breakfast for dinner too. I guess I like breakfast for lunch, but usually that is just called a late breakfast or sometimes brunch. I recently made Flaxseed Waffles with Berries and Honey Cream. I found this recipe in my piles of ripped out pages from food magazines. It comes from the January 2009 (fairly recent, so it was near the top of the pile 😛 ) issue of Bon Appetit.

In addition to the flaxseeds, the waffles are made with a combination of whole-wheat and all-purpose flour. You drizzle the waffles with maple syrup, add some mixed berries, and top with a delicious honey whipped cream. Each individual component is wonderful, but in combination it’s spectacular. 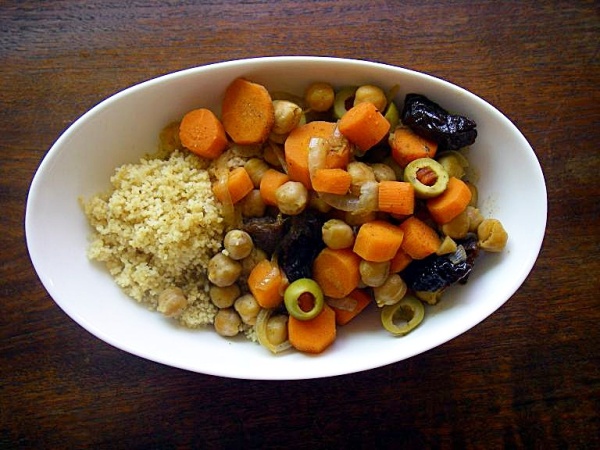 My local health  food store has a free magazine/circular–Delicious Living. For some reason, I’ve never picked it up. Well, I picked it up last week and I was pleasantly surprised to find lots of yummy sounding recipes. {It really shouldn’t be surprising b/c it is called “Delicious Living” 😛 }.

One of the recipes was for a Carrot & Chickpea Tagine, a morroccon stew. I’ve never made a tagine and had all the ingredients, so I decided to make it for Vegan Tuesday. The tagine was warm and spicy and in addition to the carrots and chickpeas, it had onions, prunes, and green olives. I paired it with whole-wheat couscous.

I also made the Maple Walnut Cookies from Vegan with a Vengeance. Although these were quite tasty (you can’t go wrong with maple/walnut). They had major spreading issues. These turned out to be the ugliest things I’ve ever seen. They started as cute little tablespoon balls and grew into flat 5 inch discs. I’m going to try to see how I can fix this. They are very delicious and I want them to succeed. So no picture or recipe until I figure it out.

Update: I posted a question about these cookies spreading on the Post Punk Kitchen forums and Isa Chandra Moskowitz, the author of Vegan with a Vegeance, responded and told me to try adding 2 tablespoons of flour. 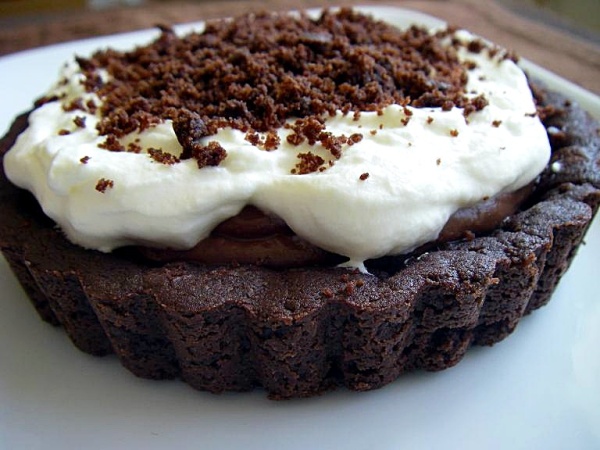 It has been a month of chocolate in the baking group blog world.  But even if this had been a year of chocolate, I would still have loved this recipe. This week’s Tuesdays with Dorie recipe–the Chocolate Creme Tart–is reminiscent of the diner classic chocolate creme pie. Instead of the usual pie crust, Dorie Greenspan’s recipe uses a deep dark chocolate tart crust. On it’s own, the crust is slightly bitter and not sweet. Paired with the chocolate creme and whipped creme topping, it’s a wonder. 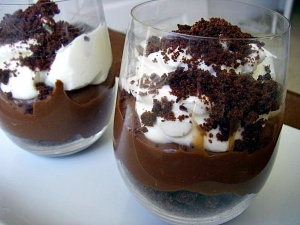 Kim of Scrumptious Photography selected this week’s recipe from  Baking…From My Home to Yours. You can find the recipe on her blog.

The April 2009 challenge is hosted by Jenny from Jenny Bakes. She has chosen Abbey’s Infamous Cheesecake as the challenge. 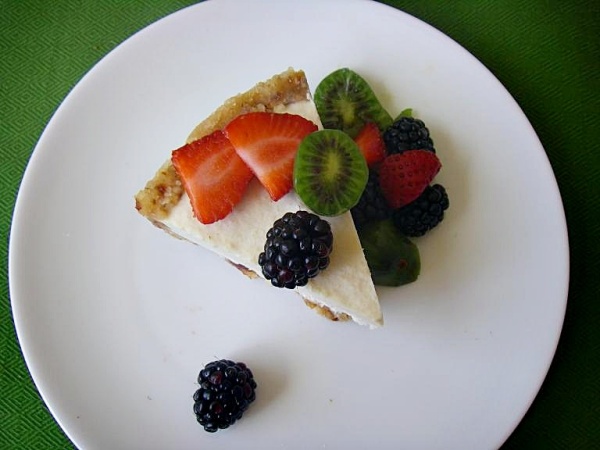 When I first read the challenge, I knew I wanted to make a vegan cheesecake. I’ve been dabbling in vegan baking and cooking and I’ve made traditional cheesecakes in the past. I decided to challenge myself by baking a vegan cheesecake. I read the Alternative Baker’s Forum at The Daring Kitchen and researched different recipes. I then found one for a RAW vegan cheesecake at Vegetarian Times. I’ve never made a raw dessert either, well, except fruit.

So, I made a Raw Cashew Cheesecake. The recipe uses raw macadamia nuts and dates for the crust and raw cashews, raw agave nectar, coconut oil, & lime juice for the filling. The result was a suprisingly light-tasting and refreshing dessert.

However, because of all the nuts and coconut oil it is not a low-calorie or low-fat dessert. One slice, like the one pictured, has 360 calories and 30 grams of fat.

You can find the recipe for it HERE. 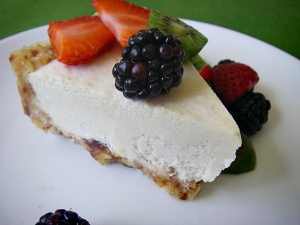 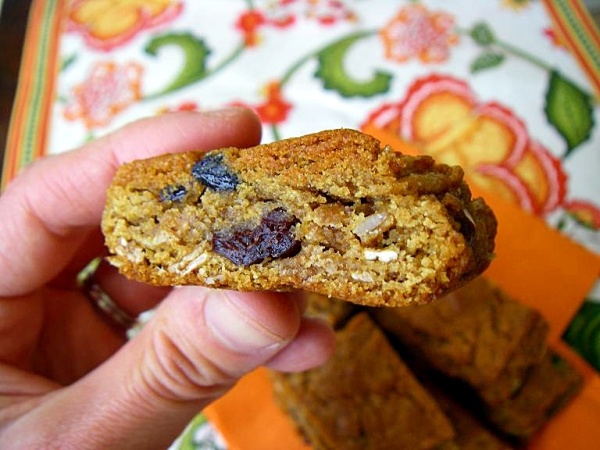 When I first read the title for these cookies, I imagined them to be like the locally-made bars wrapped in plastic with homemade stickers I buy from a little basket near the register at my health-food store. They are thick and yummy and full of healthy sounding ingredients.

I was a little disappointed when I discovered that this week’s Sweet Melissa Sundays recipe selection–the Granola Breakfast Cookies— were drop cookies  not bars. But that’s where the disappointment ended. These cookies are made with whole-wheat flour and Cherry-Almond Granola (which I blogged about on Friday) and are absolutely delicious. And I made them as bar cookies to be more like my health food store bard. So everything is right in the world.

Thank you to Jessica of A Singleton in the Kitchen for selecting these cookies. They were a big hit at work. Everyone gobbled them up.  Please visit her blog, not only for the recipe, but because it truly is a great blog. 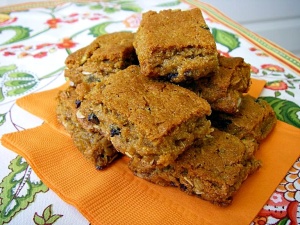