I chose this recipe for Vegan Tuesday because I had all the ingredients. I won’t say it was quick (I’m a super slow prep cook), but it was definitely easy. The recipe comes from Vegan with a Vengeance and you can find the recipe HERE.

Because my zucchini were on the smaller side–not the monster zucchini you can get in the summer–I have a some filling left over. I think it would be great on a baked potato or over pasta. It’s very delicious! 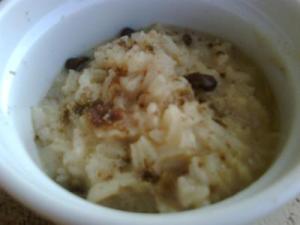 I also made vegan Chai Rice Pudding using a recipe from the March/April 2009 issue of VegNews. I rushed and made it before work. Well, really, you can’t rush rice pudding. What I meant to write was that I made it for work and then had to rush to work because I was running late. I took a picture using my Blackberry because I didn’t have time to grab my camera.

The recipe uses plain almond milk and basmati rice. It is sweetened with agave syrup and spiced with cinnamon, cloves, cardamon, and ginger. Chopped dates and raisins add some more sweetness. YUM!

Millet is a grain seed that you probably know most commonly from bird food. It’s also a nutritious whole grain with loads of B-vitamins that has been becoming more and more popular in whole-grain cooking.

This week I made Millet Fried “Rice” from Super Natural Cooking. This was my first time cooking/eating millet and I loved it. It has a nutty taste, almost earthy but not too earthy. Just the right level of earth.

The stir-fry is made like regular fried rice. The grain is pre-cooked, you cook the egg and tofu cubes, chop the veggies and throw everything together. I’m excited  about using millet in more recipes. everybody loves sandwiches recently posted about using millet in granola which I’m making the next time I need granola.

You can find the recipe for Millet Fried “Rice” HERE. Enjoy! It’s wonderful.