These are pictures from my second attempt at making Dorie Greenspan’s Brioche Raisin Snails. My first attempt was a horrible disaster that ended up in the garbage. It was a math mistake. I can’t believe I made a math mistake. I do math for a living. Well, to be fair, I don’t do much math now, I manage people who do math. But come on! A simple math mistake.

I tried to convert the amount of active yeast called for in the recipe to the instant yeast I use and love. It should be relatively simple. You use 3/4 of the amount of instant yeast.  I ended up using way too little yeast so my poor brioche dough didn’t rise like it should. 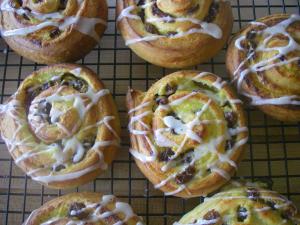 Brioche Raisin Snails were selected as a Tuesdays with Dorie Recipe back in March 2008 prior to me joining the group. It uses 1/2 of Dorie Greenspan’s Golden Brioche Loaves recipe. I didn’t even attempt to make and assemble the snails with my first dough. I  did though make the loaf. It was very dense and salty, duh. I tried to use it by making French toast hoping the custard would hide the fact that the bread was a disaster. Nope, it all went in the garbage along with the other unused half.

I’m happy to report that my second attempt was a success. So successful, that the snails didn’t last a day. These are so good–which has been reported by everyone that’s made them–that I’m so glad I persevered. Well, I did have pastry cream and rum-soaked and flambéd raisins in my refrigerator  that I didn’t want  to go to waste.  So, yes, I made brioche twice in one weekend. But it was so worth it. Make these!

You can find the recipe for these HERE.