On Tuesday, as we were experiencing lots of rain and big waves due to the cyclone, the Captain makes an announcement that he just talked to people on Bora Bora and it has been raining there the last two days. This was my third visit to Bora Bora and I was spending most of the day diving, but really wanted it to be sunny. Luckily, the weather gods were smiling on us and we woke up to a perfect day as we arrived Wednesday morning.

There were so many divers diving in Bora Bora, they needed to organize the tanks and all the equipment with labels. This my tank for dive #2 that day.

Driving the Zodiac to the dive site. Okay, not really–they wouldn’t let me. I asked them to take a picture of me pretending to drive the boat. 😛 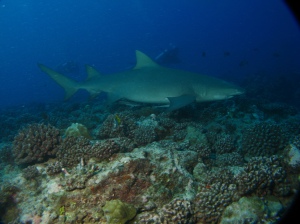 I’m in the upper right next to Jean-Michel Cousteau.

Since I had some free time in the late afternoon I decided to visit Bloody Mary’s, the famous bar and restaurant on Bora Bora. I took a cab from the dock to the restaurant and the driver  couldn’t stop talking about Couples Retreat. The movie was filmed at the St. Regis on Bora Bora and the movie rented the driver’s boat for a month.  If you’ve seen the movie it’s the boat used in the shark scene. 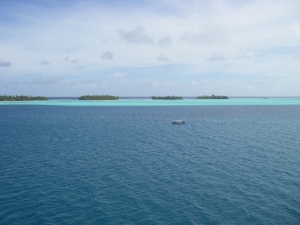 Other than being remarkably beautiful, Taha’a is known as vanilla island because 80% of Taihitian vanilla is grown there. I bought lots of vanilla of course. 😛

We spent the day at Motu Mahana with snorkeling, kayaking, waterskiing, and a beach BBQ. 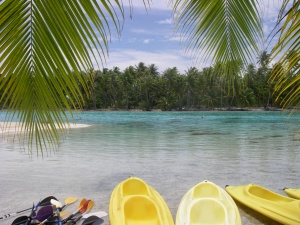 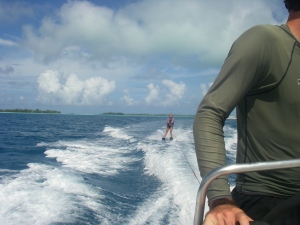