Because of travel and crossing the International Date Line…Boarded plane in LAX on November 19th and 10 hours later landed in Fiji on November 21.

This is my third year in a row cruising  the South Pacific; first time to Fiji. On the itinerary this year: 3 different islands in Fiji, Tonga, 2 different Cook Islands, Bora Bora, Taha’a, Moorea, and then finish in Papeete. I’m not a big fan of cruising, but I obviously like this ship. It’s small, 300 passengers, and geared towards activity (diving, hiking, snorkeling, waterskiing, windsurfing, kayaking). 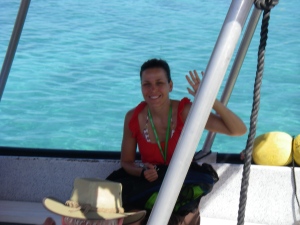 Getting ready to snorkel in Rangiroa, 2007

It’s like summer camp because I get to meet up with with friends I met from the years before.

There’s Laksman from Sri Lanka. He’s a bartender on the ship. I met him the first year I was on board and last year we went ran together in the Marquesas and on Moorea.

There’s the Marina Crew. Martin L. (Montreal) who was my scuba instructor, Robert (Montreal), who was my water ski instructor, Martin B. (Montreal)  and Frederick (France), two more dive instructors, and Emily (Belgium) the travel desk coordinator. (All names pronounced the French way).

There’s Dominique (Tahiti) who is the dive master. He wasn’t on board last year, but will be back this year. The crew changes based on contract length and vacations.

There’s the Engine Room Crew. They are all from Croatia. We would hang out at one of the ship’s bars at night and sometimes meet up on hikes.

There’s Alex, one of the sommeliers. He’s from France.

Although I won’t see them this year, I’ve also made friend with other passengers who I’ve kept in touch through Facebook: Patrick from Eugene, Vanessa from Santa Monica, Olivier from France.  I love meeting new people. I wonder who I will meet this year.

So what happened on November 20, 2009? Anything exciting?