I’m slowly making my way through  Daring Bakers challenges that occurred prior to me joining the group.  For October 2008, the host challenged the group to make Pizza Napoletana from Peter Reinhart’s The Bread Bakers Apprentice.

This challenge called my name–I have the book and I love making from scratch pizza. One part of the challenge was to perform the authentic pizza dough toss. I did attempt it and the results were disastrous. One reason (and rather than my own inadequacies) my performance was sub par could have been that I reduced the size of the pizzas from 6 ounce to 4 ounce.

To top the pizza, I used a recipe I found in the May (already???) 2009 issue of Bon Appetit for Asparagus, Fingerling Potato, and Goat Cheese Pizza. In addition to goat cheese, the pizza is also topped with mozzarella and Parmesan.

The pizza was wonderful. The crust was thin and crunchy and flavorful, due to the delayed fermentation. Unlike most other pizza dough recipes that can be thrown together at the last minute, this one requires an overnight in the refrigerator. The toppings were great. I’ve never had potato on a pizza before and I had been wanting to try it. I loved it. I’m definitely adding it to my topping rotation. And goat cheese–enough said. 😛

You can find the recipe for the pizza dough  HERE at Rosa’s Yummy Yums, the host of the October 2008 Daring Bakers Challenge.

The recipe for topping the  pizza is  HERE. 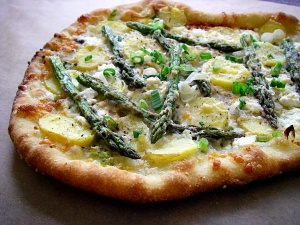