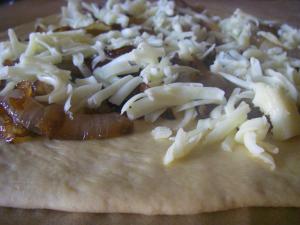 This week‘s The Art and Soul of Baking recipe was pizza dough. I’ve made pizza from scratch before and it is easy and doesn’t take a long time. I made the pizza in between 3 batchs of cookies.  I made a broccoli and cheese pizza for P and a carmelized onion and cheese pizza for me. 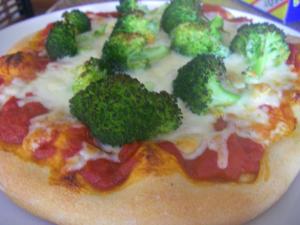 Homemade pizza is great, not only because it is an easy dough, but also because the dough freezes well. I stick it in the fridge before work and its perfectly defrosted and ready for rolling when I get home.

Enough for one personal-size pizza

Heat of olive oil over medium heat. Add onion and saute until golden brown. Add cognac and and balsamic vinegar and cook a few minutes longer. Remove from heat and add salt to taste. 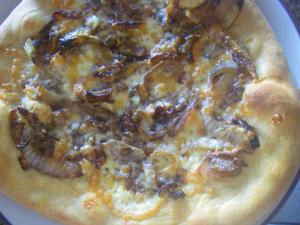 I also made the next recipe  in Super Natural Cooking, Grain-ola. For the last few months, I’ve been making home made granola for my morning cereals and yogurt instead of buying processed cereal from the store. I’ve never made the same recipe twice, but they all follow the same method. Mix rolled oats with nuts, add a sweetener and an oil, sometimes add wheat germ or shredded coconut. Bake in low heat for 30 to 40 minutes, stirring every 10 minutes or so, until toasty and golden brown. Remove from oven and stir in dried fruit. Stir occasionally while it cools. Once cooled, store in an air-tight container. 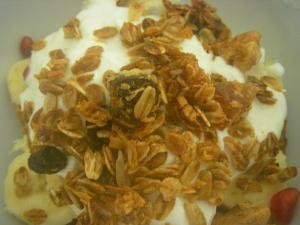 This recipe called for coconut oil, which I have never used, and honey as the sweetener. In addition to the oats, walnuts, raw sunflower seeds, shredded unsweetened coconut, orange zest, and dried tropical fruits were added to the mix.

This oatmeal tastes okay. It has a weird taste. I’m thinking it is the coconut oil. I’m leaving for vacation this week and will bring some along for the plane ride.