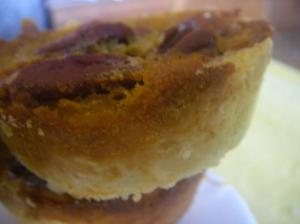 I was prepared to hate this recipe. I’m not a fan of pumpkin pie and pecan pie was never my thing. I’m an apple pie lover. I’m indiscriminate in my love, any kind–old fashioned, Dutch, turnovers, tarts–it doesn’t matter. Add vanilla ice cream and welcome to heaven. 😛 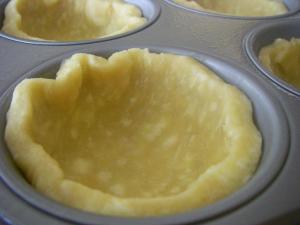 See the chunks of buttery goodness?

This week’s Tuesdays with Dorie recipe, A Thanksgiving Twofer Pie, was created by Dorie Greenspan to appease lovers of either pumpkin pies, pecan pies, or both kind of pies. 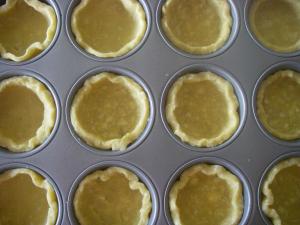 Instead of making one big pie, I decided to make tiny pies in a cupcake/muffin pan. This involved a lot of hope and faith on my part because I wasn’t sure the pie-ettes would release from the pan without breaking or falling apart.  I was willing to risk it, to try a new pie baking method, because if I failed it would have been no big loss. I wasn’t going to like this recipe. 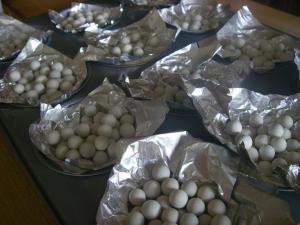 Due to the smaller size, I had to play around with the baking times both when I pre-baked the crust and when I baked the filled pie-ettes.

The secret to a great pie crust is butter. Specifically, very cold butter. When you make the pie crust, you want to keep the butter as cold as possible. I always freeze my butter and use ice-cold water. When you roll out the dough, you should still see chunks of butter. It’s also important to chill the dough prior to baking to make sure that the butter chunks are still cold. When you bake the crust, the butter chunks melt and create pockets of flakiness and the cold butter delays the melting until the baking crust can support the air pockets. 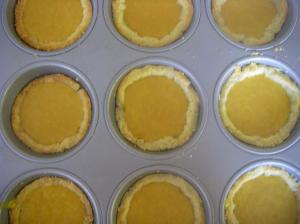 A 9-inch pie crust was enough to mold each cup in the muffin tin. I made the fillings as directed, but ended up with too much. I ended up pouring the extra pumpkin pie filling into custard dishes and making a couple of crustless pumpkin pies. 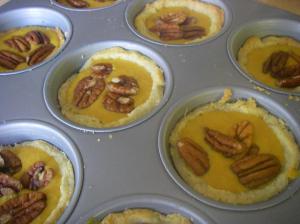 The pie-ettes turned out wonderful. I may not be a pumpkin or pecan pie fan, but I am now a pumpkin and pecan twofer pie fan. YUM! 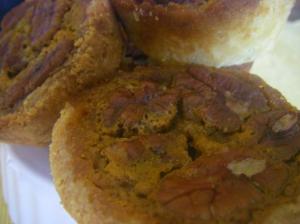 Thank you to Vibi of La casserole carrée who chose the Thanksgiving Twofer Pie for this week. This was a great choice because I wouldn’t normally pick something like this to bake.

Update: These were a BIG hit at work! 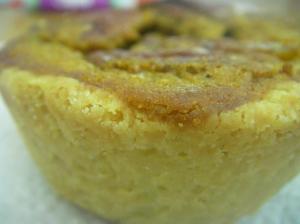