I only tried the oatmeal two ways. My usual way to eat oatmeal–the boring, traditional way–with raisins, brown sugar, and a little bit of milk. And one way suggested by Heidi–with pomegranate molasses and toasted walnuts. Both were delicious. 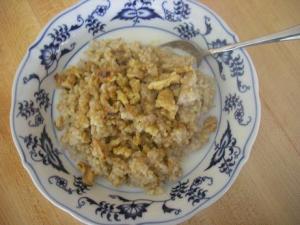 You can find pomegranate molasses in  Middle-Eastern or gourmet/specialty grocery stores. I found it at my local, non-chain gourmet grocery. I liked it as an addition to oatmeal and I think it would be great on plain vanilla ice-cream. The tart flavor of the molasses would complement the sweetness of the ice cream.

The wild rice flour pancakes were another story. I won’t make this recipe again. I don’t like wild rice, so it’s no surprise that I didn’t like pancakes made with wild rice flour. Even with only  a 1/2 cup to the 1 1/2 cups of whole wheat pastry flour, I could still taste the woodsy flavor of wild rice. Yuck! At least I tried it… 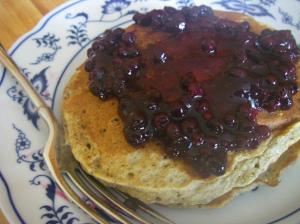